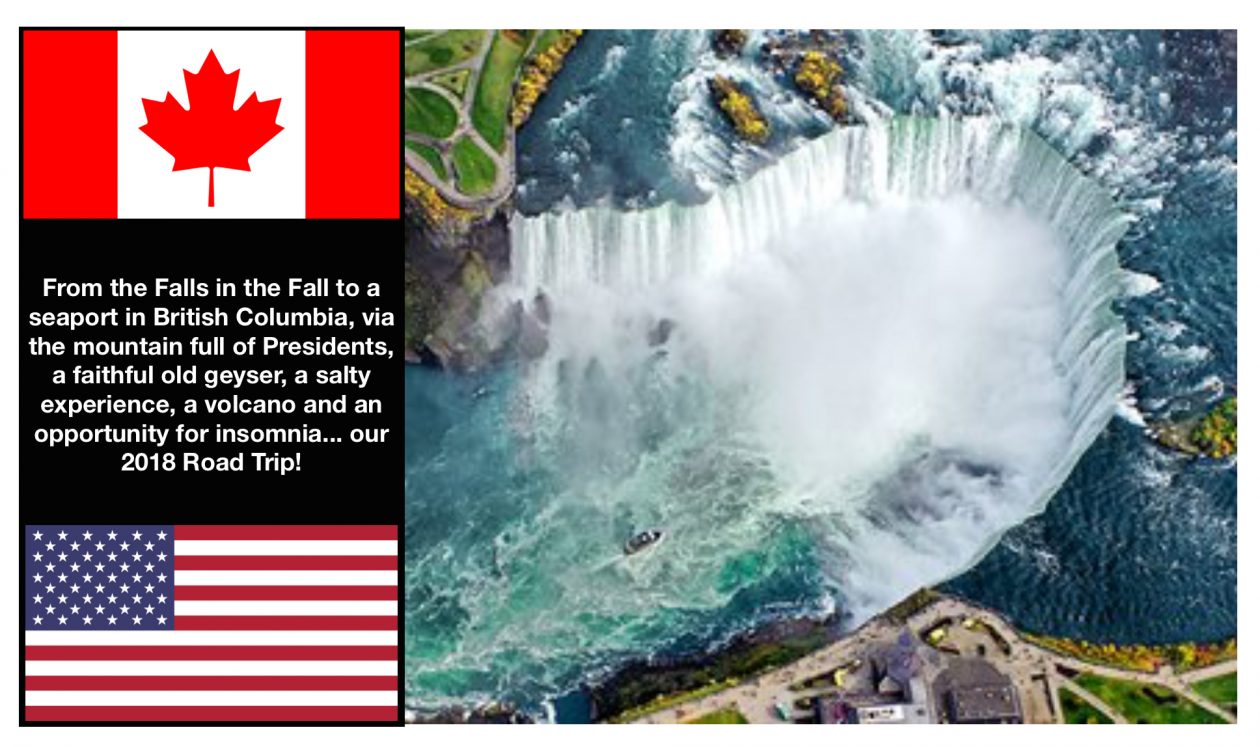 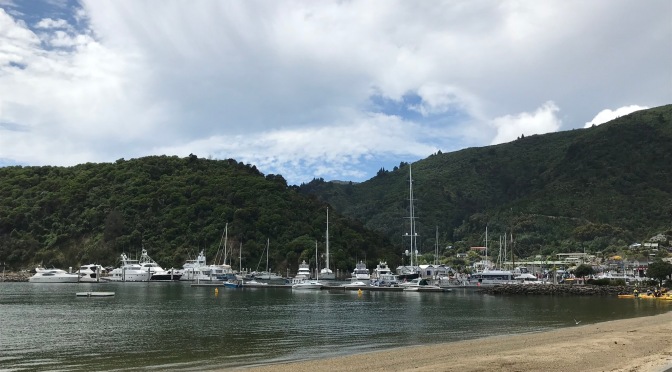 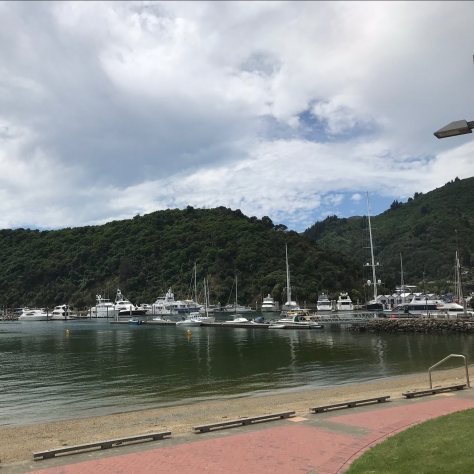 Our stop today in the pretty little port of Picton was the last we will see of South Island. This is the place where ferries transport folks from North Island to sample what we have enjoyed (and much more besides) over the past few days. Judging by the number of backpackers we saw carrying life on their shoulders, many were either starting or ending their adventures with a ferry ride. Of course this is Marlborough country – no, not the cigarettes, the wine – and it is possible that jobs in the vineyards also tempt the young, and the slightly less young.

However, for us, Picton had other temptations…good coffee and free WiFi! As we got off the shuttle bus which brought us from our ship and into the town, the area around the Information Centre was filled to capacity with young and old (mainly the latter) with laptops, tablets and phones, sometimes all three, looking for the fastest free Wi-fi signals. Just as you started to collect messages, down went the signal, so off we went in search of coffee. I have to say that Starbucks is not my favourite purveyor of coffee, but when you need Wi-fi AND coffee there is a huge regret that good old Picton must have said ‘no’ to the mighty dollars of Starbucks and McDonald’s. However, all was not lost and we got a free half hour online and some coffee in a local cafe whilst being entertained by the Winter Olympics on TV…wot?! We could also have had free Wi-fi with a hairdo up the road. 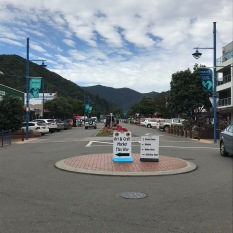 Anyway, this pretty little port invited us to stroll the shops (we did), walk the paths around the bay (Ann did) and appreciate again the genuine welcome we received. Who can blame these small towns for wanting to attract visitors, especially those who come on cruise ships in possession of money. Quite a few shops advertised their willingness to take US dollars, Australian dollars and even New Zealand dollars as an afterthought. No mention of Sterling I noticed!

Once again the views around the sheltered bay were stunning with mountains sweeping down to the blue waters. Spacious houses around the bay were being offered in the estate agents’ windows for somewhere in the region of NZ $600,000 (less than £400,000). Watching the children playing in the park with fountains and water games rather than simply swings and slides, reminded me what a great outdoor life they enjoy in this part of the world for a good part of the year. Bliss.

Ever onwards and tomorrow we will wake up in Wellington. For me, a return visit.

‘Picton on Sea’, as a name, reminded me of Dads’ Army’s Warmington-on-Sea. And, as we began to meander round the small port, I saw this…

It interests me that we often have War Memorials but rarely Peace Memorials. Why?! However, this was both as, on the town side, I saw… 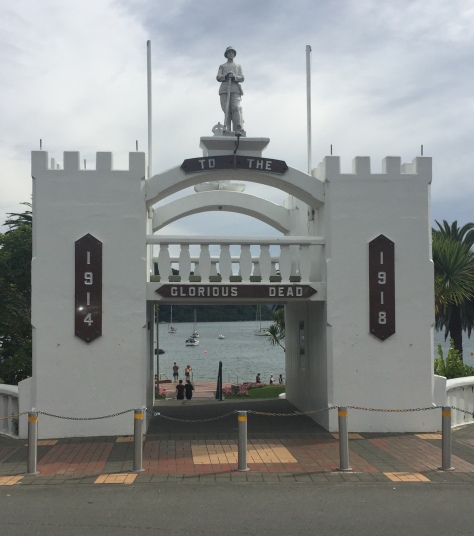 The tenders/lifeboats we use can carry about 150 people in the event of an emergency but ‘only’ 120 are taken on the tender function. Being one for spotting the unusual, Ann’s maiden name is the tender manufacturer!

Picton wasn’t the highlight of our tour and my insistence on eating New Zealand lamb in New Zealand at a local café was an error as my indigestion reminded me. Ah, well. Better food on board.

In the evening, in the absence of B.B. King’s being available, was an experienced and competent New York Jewish comedian – one or two clever anecdotes delivered in a dry manner. Tomorrow, a French flautist… perhaps.

And so to Picton, our last port of call on South Island and another very friendly welcome, this time accompanied by fresh flower buttonholes for everyone. The flowers might as easily have come from an English country garden.

Picton is an extremely busy ferry port which connects the two main islands of New Zealand, across the Cook Strait and where backpackers abound. There are numerous options for outdoor activities, wine tours and wildlife watching. Like most fellow Noordam travellers, we were more interested in Wi-fi spotting! The visitor information centre was awash with people on phones and iPads as well as those booking tours. Success in connecting to the internet was followed by coffee and a stroll through the centre of the small town. 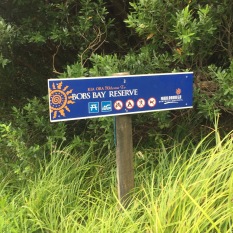 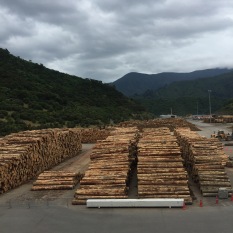 After lunch, I set off on one of the recommended walks along the coast to Bob’s Bay. Thirty minutes of ‘upsie downside’ walking was rewarded with a pretty bay and beach. Bob was, perhaps, a local fisherman who found an excellent place to escape! Carolyn and Kath were, once again, very patient waiting for the slightly mad walking person! 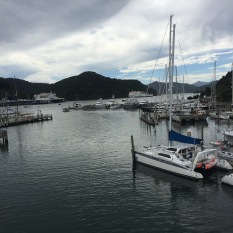 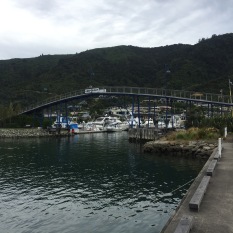 South Island has provided many delights and the poster, seen as we boarded the shuttle bus back to Noordam, sums up how we have felt about this beautiful island. 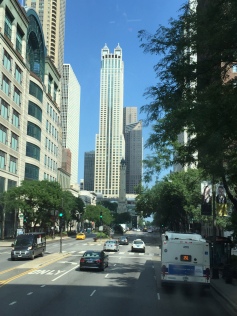 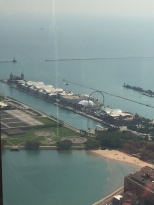