We hadn’t seen any rain since St. Louis, and as people say it hardly ever rains in Arizona, we experienced a vague sense of disbelief to see the river washing across our hotel car park as we left for Kingman.

Kingman is one of the towns mentioned in the Route 66 song, but, before dropping down from the mountains into the Mohave Desert, we experienced Seligman. I have to say ‘experienced’ because it’s a delightfully whacky small town, full of Route 66 iconic structures dedicated to the travellers of the Mother Road.

Amazingly, it was full of French people (a coach load, I think) and I had a huge chuckle when one lady approached Carolyn, thinking she was a shop assistant, and engaged her with a rapid flow of questions in French.  Carolyn smiled, shrugged Gallic-like and the lady moved on, apparently satisfied. How does she do that?! 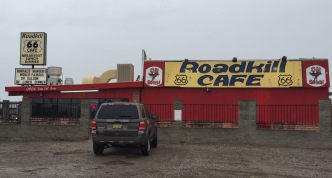 We found a ‘Roadkill Cafe’, although I am not sure who on earth would like to go and eat dead animals retrieved from the roadside. Certainly not us…  I was amazed at the menu though. It wasn’t real roadkill but an interesting marketing ploy

At lunchtime, you can try the “Tried-to-pass-me-bye on Rye” otherwise served as a Patty Melt in diners – or “Varmint Vittles” – a chicken wrap – or even a “No Luck Buck” – a French Dip sandwich.

When it comes to dinner there is the “Rack of Raccoon” – an 18-inch (46cm) rack of ribs – or “Long Gone Fawn” – a 6 ounce (170 gram) sirloin steak. Alternately, you can try “The Chicken that almost crossed the road” – fried chicken – or “Rigor Mortis Tortoise” – fried shrimp.

And there’s something for the kids, too. The children’s menu includes “Donald Forgot to Duck” – biscuits and gravy – or the delightfully named “Poached Bambi Burger” – which is a plain old hamburger.

Moving swiftly on!  We then found a sign claiming that Seligman was the birthplace of Historic Route 66 and subsequently found that the town, which was on the original route, convinced the State of Arizona to designate Route 66 an historic highway. It is part of the longest unbroken stretch of the remaining Old Route 66 most of which we drove today.

As we drove across the mountains, the clouds began to lift and we passed through Hualapai Reservation at Peach Springs. I find it interesting that the signs still say ‘Indian Reservation’ whereas we now talk about Native Americans. 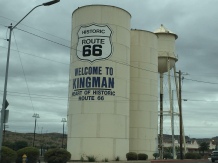 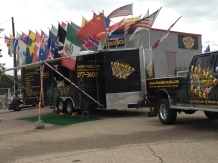 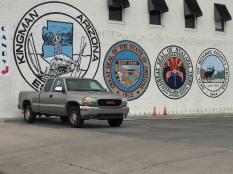 Kingman, too, has lots of Route 66 curios and we had lunch at Mr D’z Route 66 Diner. It was somewhere straight out of the movies with cheery girls and boys doing a great job of waiting on tables. The hot dogs were super and the chocolate sundae we shared was mouth-wateringly divine. Not exactly the healthiest meal but we did get bits of salad with the hot dogs!  And did I mention the thrice cooked fries?….Hmm.  I was quite amused by the toilet arrangements too. There were two screens – Elvis and Marilyn -behind which were ordinary ‘his and her’ toilet doors. 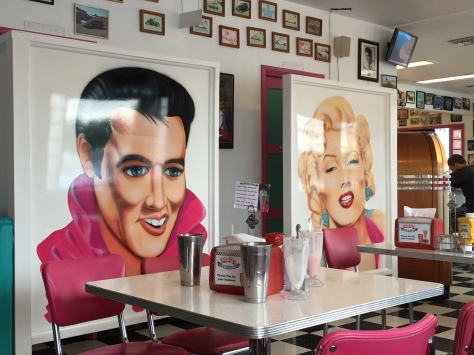 On to our hotel for the night. How cool is this Ramada? 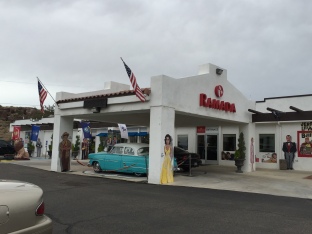 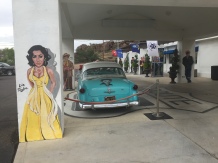 Off our route tomorrow and on to Las Vegas…

Before we leave Arizona, let me explain their Time Zones. Arizona operates on Mountain Time Zone like New Mexico, Colorado, Utah etc. However, most of Arizona, unlike the other Mountain Time States, does not observe summer daylight saving time. You will note that I said, “most of…”. This is because in the part of the Navajo Nation which is in Arizona does! Therefore, even in the same State, our watches and electronic clocks, including the Sat. Nav., varied by an hour as we drove over artificial lines on a map. They say that time is relative but imagine you had a cousin down the road or even next door! Relatively difficult, eh?!

Mr D’z Diner was a fun experience but Kath didn’t mention the music. 1960s classics! Ranging from Sam the Sham, through Herman’s Hermits, Chuck Berry, The Tokens and, of course, Elvis. Singing along, albeit quietly, was the order of the day alongside the Harley Dog, Root Beer and fries. 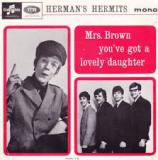 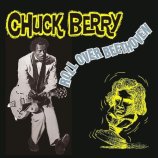 We’re now heading into Nevada, where I’m hoping to see some big cacti as well as a big dam (Hoover) and then on to California.

But, before I finish, please note the sign to the left of the silent movie heroine caught on the cattle catcher – which I’ve now researched and found it’s technically called a “Pilot”. You will note that I didn’t call it a cowcatcher for obvious reasons. (Although I get the final edit, we still have a way to go!!! CTMQ.)