There is no doubt that the Colorado River, that flows through the Grand Canyon, is deep and the sheer sides of the cliffs are a mile high.  It doesn’t stop the millions of visitors from peering over the edge and stepping out onto the unguarded ledges, so who were we not to join in?

It was a first visit for both of us and, after some last minute research, we elected to go to the South Rim which is managed by the National Parks and is quite superb.  For $30 per car you can park at any of the excellent parking areas and spend the day hopping on and off shuttle buses which take you to to many vantage points to capture the odd photograph. There were films, information points, guides, restaurants and just about anything you could need. We had intended to drive ourselves around, and many do, but the shuttle buses were an easy solution. The ticket last for a week, too

In the film we watched, we were told that the only limit to the vistas was the extent of our imagination, and so it was.  Let a small number of our photographs provide the evidence for wanting to stay for 10 hours and wait for the setting sun to paint its own tribute….. 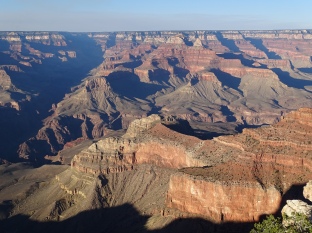 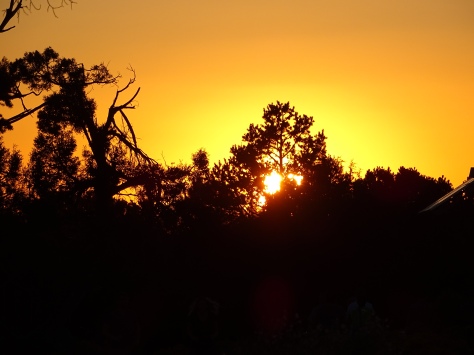 Our first day since Chicago that we haven’t moved hotel! A long day at Grand Canyon but well worth it. The history it has had, and shows, is incredible.

So,… animals? Today, we saw a prairie dog, several elks: including two walking in front of our car in the dark! Oh, deer (sic!). And, Alvin! Well, it was a chipmunk and aren’t they all called Alvin? 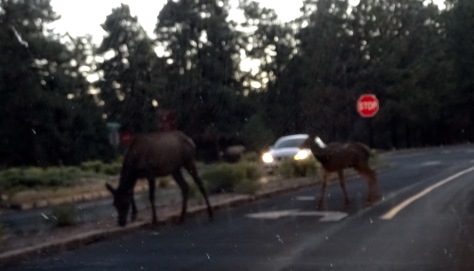 Mule trips are recommended here but we didn’t succumb. My dad looked after a mule when he was in the army during the war. He named it after my mum. Apparently, she had stubborn genes. What?!

Driving back the fifty or so miles tonight reminded me of the importance of dipping headlights and that, it seems, American drivers don’t accept that. Dazzling – sights during the day; headlights at night.

Finally, from me, the power of nature…
The Grand Canyon has what are described as “unique combinations of geologic colour and erosional forms which decorate a canyon that is 277 river miles (446km) long, up to 18 miles (29km) wide, and a mile (1.6km) deep”. The Grand Canyon overwhelms our senses through its immense size. It was formed millions of years ago and has been mainly eroded by the Colorado River. Water carving its way through rocks over eons of time to a mile in depth. Animals and plants forcing their acceptance in the harsh environment and, above all, humans for thousands of years have lived here. In awe, as ever.