Still no sign of the Simpsons, so they probably don’t live in this Springfield (Missouri) either!

The day started anything but bright and fair and the only brightness in St Louis came from flashes of lightning. The TV announced localised flash flooding and a cold front where the temperatures are dropping to 82 degrees Farenheit. How fortunate then that about 50 miles beyond St Louis, normal weather service was resumed. We took the Tulsa Road for part of the journey and as we are staying there tomorrow, I guess you could say that we were 24 hours from Tulsa!!  Hmmm, perhaps not the most amusing or original thing to say, but it tickled us.

Today, we were driving about 250 miles and when possible we skipped off the main highway to actually drive along the old Route 66. This is harder to do than you might imagine as much of the original road has been covered over by a much larger highway which by-passes the old small towns and villages. We went to find one such place today, Fanning 66 Outpost, which is famous for (of all things) the largest rocking chair in the world. Next door was a store that once sold all kinds of Route 66 memorabilia, but sadly displayed a sign to say they had gone out of business.  I wonder how many more such Route 66 icons will go the same way? On the stylised mural on the wall, we were both surprised and amused to find the only name which was mentioned was Carolyn’s Cafe! As for the petrol sign, Route 66 was so famous they named a petrol brand after it 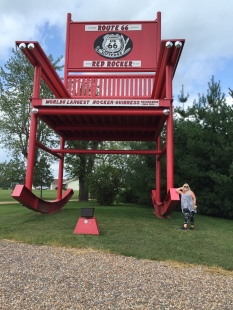 Underterred, we headed into Springfield in glorious sunshine and went off to explore.  It was good to be back in the sun, although the heat and particularly the humidity are crazy.  We seem to attract attention when we speak and find ourselves ‘novelty attractions’.  We should talk more and charge!

Occasionally, on the roads, we notice that Tarmac has been discovered… albeit recently. Concrete rules! We saw our first real hills today and the countryside was green and tree laden. The places we passed through included: Cuba, Lebanon and the quaintly named Doolittle, which was quite near a sign to ‘Pomme De Terre Lake’. What?! We came across travelling stacked tractor units. Impressive and expensive.

We passed several fireworks factories, Jesse James hideout (then) and waxworks (now) but noted the Nuclear War shelter and a Mule Tradng Post. More likely and more frequent events are the tornados in this area. Astonishing for us to realise that these are normal events and have to be accommodated.

Another unusual (for us) sign, which we came across first in Chicago and several times today, is ‘No guns allowed’ – and we, rightly, in the UK think smoking cigarettes should be banned.

Finally, for today… as Shaw said, “Two countries separated by a common language”. I saw on the menu ‘Baked potato’ but, without much thought, asked for ‘Jacket potato’ much to the puzzlement and then amusement of the waiter. He told us later that he had immediately briefed/warned the kitchen staff about the English! 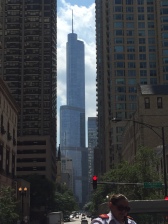 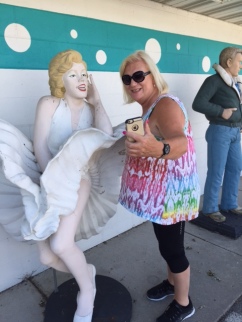